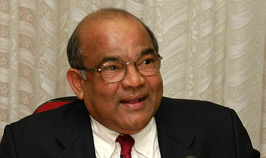 He was a member of The Palais Royal Initiative on the Reform of the International Monetary System. He was also on the Advisory Board of Institute for New Economic Thinking (INET). He was member of the High Level Advisory Panel on Independent Evaluation of Role of IMF in Global Financial Crisis.

Dr. Reddy (born on August 17, 1941, in Patur, Cuddapah District, then in Madras Presidency, British India) received his M.A. in economics from Madras University, India. He holds a Ph.D. from Osmania University, Hyderabad. He also holds a Diploma in Economic Planning from the Institute of Social Studies, The Netherlands.

He joined Indian Administrative Service in 1964. He served in Governments of Andhra Pradesh, Government of India and World Bank, and rose to the position of Secretary (Banking) in Ministry of Finance in 1995. He moved to Reserve Bank of India in 1996 as Deputy Governor, and then to International Monetary Fund in 2002 as Executive Director on the Board.